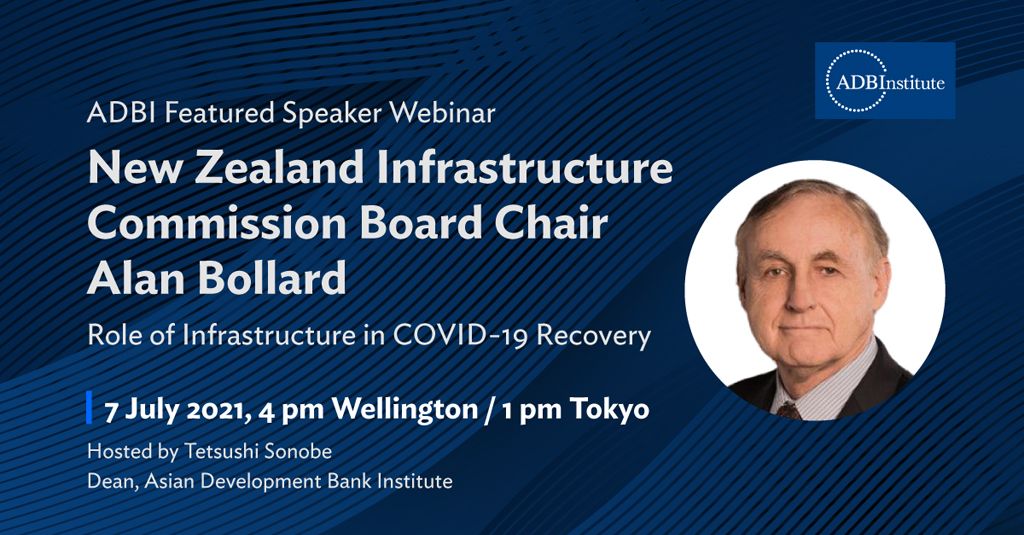 This ADBI Featured Speaker Webinar presented New Zealand Infrastructure Commission Board Chair Alan Bollard, who examined the role of infrastructure in COVID-19 recovery in New Zealand and wider Asia and the Pacific with ADBI Dean Tetsushi Sonobe and a panel of experts.

Drawing upon his experience as Reserve Bank of New Zealand Governor during the Global Financial Crisis and its aftermath and former head of the Asia-Pacific Economic Cooperation (APEC) Secretariat, he described post-pandemic infrastructure development conditions and impacts. He also addressed onward project financing, climate change, and sustainability considerations.

The discussion was followed by an audience question and answer session.

Alan Bollard was appointed as the inaugural Board Chair of the New Zealand Infrastructure Commission upon its establishment in 2019.

A professor of practice at Victoria University of Wellington’s business school, he served as Executive Director of the APEC Secretariat in Singapore from 2013-2018 and Reserve Bank of New Zealand Governor from 2002-2012.

He holds a PhD in economics from the University of Auckland.

See more about this ADBI event.